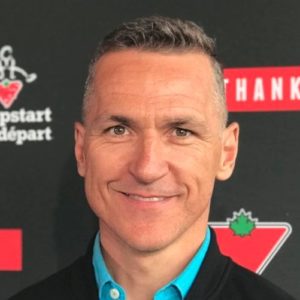 As Athlete Ambassador of the 2019 Canadian Tire National Skating Championships, Elvis shared accounts of some of his experiences competing at Nationals, the things it taught him and the lessons he hopes he can pass along. 20 years post competition and he is still one of the most sought-after performers in the world.  Listen Now »

About the OLY Designation?

When you see the letters PhD after someone’s name, it is recognition that the individual has reached the highest academic level, an accomplishment which took years of hard work and sacrifice to achieve.  From a sports perspective, this description also rings true when considering the dedication it takes to compete as a high-performance athlete.

This resonated with the World Olympians Association (WOA) who believed that athletes deserved a similar designation to recognize their achievement of competing at the Olympic Games. As WOA President, Joel Bouzou said, “Much like a doctor, a lawyer or a university professor, becoming an Olympian takes many years of hard work and requires a diverse range of skills. I believe this initiative will provide Olympians with the professional recognition they deserve.”

The OLY designation was launched in November 2017 and since then thousands of Olympians have registered for the initiative available to anyone who has competed at a Summer or Winter Olympic Games. Once registered, you receive a certificate from the WOA and the right to use the letters anywhere you use your name, such as on official documentation, resumes and social media.  According to the WOA, “OLY provides a symbolic recognition of an Olympian’s status in society, promoting an Olympian’s social, charitable, and community-based work and acting as a reminder of their achievements and of their responsibility to embody the values of Olympism in everyday life.”

I registered for my designation shortly after the program launched.  It was rewarding to receive the certificate as recognition of my achievement but I wasn’t quite sure how I was going to use the OLY letters.  However, over the past year, I have started to understand the value of it as a professional tool.

Having competed at the Calgary Games 30 years ago, I sometimes struggle with how best to include my identity as an Olympian into my current professional identity. I have found that by adding OLY after my name at the top of my CV, LinkedIn account and business cards, it’s an effective way to let people know I am an Olympian plus it can be a great conversation starter with business connections.  It has also connected me to the Olympian community.  Now when I browse LinkedIn or other social networks, it’s easy to find other Olympians through their OLY designation and I realize once again what an honour and privilege it is to be part of this Olympic family.

If you are interested in applying, you can do so at: https://olympians.org/olympians/oly/

Golf isn’t the only sport with caddies.  Figure skating has had its caddies too.  Before electronic scoring, caddies (usually teenage skaters of the host club) sat behind the judges with boxes containing numbers. After every performance, judges communicated their marks to their own caddy, one per judge. At the referee’s whistle, the caddies displayed these marks. Accountants, sitting across the arena, recorded the numbers for processing in the accounting room.

Being a caddy was special. You had one of the best seats in the house, a responsible job, sometimes a special uniform, and you were very visible. Caddies trained ahead of time: standing nice and straight, holding marks at eye level, smoothly getting the number cards in/out of the boxes, putting them back in correct numerical order and performing these duties to whistle signals from the event referee. However, practising in an empty arena was quite different from being the centre of attention in a crowded ice facility with announcers, television cameras, media people, blazing lights and judges sitting right below you.

At a Western Divisionals, a qualifier for Canadians, we had a dance referee, experienced, knowledgeable, efficient, and well respected. He was also noted for being fussy and rather demanding. Judges were usually aware of his reputation and would, at times, feel uneasy being on his panel.

The compulsory dances were to begin, and the referee snapped his orders to judges and caddies.  One caddy, unnerved by the situation, was, initially, a bit slow getting her marks out of her box.  She dropped a number, and a couple of times, started to lower her marks slightly before the whistle. An irritated referee, in front of the crowd, barked at the girls, reminding them that the display of marks coincided with his whistle.

After a dance performance, the referee stood up, blew his whistle, marks came up, announcer read the scores.  Perfect! He waved to bring on the next competitors. The announcer gestured and pointed.  The ice captain across the ice did the same.  Nothing was happening! A few more gesticulations indicated something was amiss behind him. He turned to see the caddies, ramrod straight, like soldiers on inspection, bravely holding up the scores. He had neglected to blow his whistle! A few arm waves to prompt the caddies to lower their numbers didn’t work.  Only a whistle would do.

An easy fix. But where was the whistle? A quiet audience watched while he searched. It wasn’t in his hand or on his table.  Shuffling his papers unearthed no whistle.  Had it fallen on the floor of the judges stand?  Shifting the table legs was unproductive. His pockets yielded nothing.  Then he glanced down and there it was, on the seat of his chair.  Whistle retrieved, the referee blew his signal, the caddies responded.  For the rest of the event both referee and caddies performed their duties perfectly.

One couldn’t help but chuckle at this brief drama. The caddies commanded some admiration for taking a stand and just following orders. Meet the incomparable Jean Westwood, competitor, World Champion, Coach, Choreographer, dog breeder and judge, guru and trend setter. At 87 years young, Jean is as feisty and forthright today as she was when she and partner Lawrence Demmy took the dance world by storm over 60 years ago!

In this edition of the Alumni Blog, meet Jean Westwood as we feature Part 1 of Jean’s Gems.

There are no dumb champions. Education is vital for learning essential quick reaction.

I successfully competed in all 3 disciplines which set me up to coach successfully in each one, singles, pairs and dance, with success in them all.

Champions are born not made. A top coach may help students to achieve goals earlier while a coach of lesser talent may inadvertently prevent a student’s success.

A good coach puts their pupils’ wishes ahead of their own ambitions, i.e. attending National and International Events.

A true champion will eventually make it regardless.

I am a strong believer in Fate and Destiny for competitors and coaches: the destiny of being in the right place at the right time with the right pupil or adversary.

I hold myself more fortunate than most future coaches due to ALL the coaches I was privileged to learn from.

Presented to HRH Queen Elizabeth 2nd (and curtsied without falling down)

I started skating at the age of 6 under duress as my sister wanted to skate. As a result I had to give up my involvement with horses.

I was fortunate in my individual coach experiences as they all believed my talent was beyond their capabilities and forwarded me on to a more senior coach. Either that, or I was too troublesome to control! Olympic silver medallist and six-time national medallist Kevin Reynolds, 28, Coquitlam, B.C., has announced his retirement from competitive skating. Reynolds has been a constant on the skating scene since 2002, when he won the Canadian novice title. He won a silver medal as a member of the Canadian squad in the team event at the 2014 Olympic Winter Games in Sochi, Russia.

“Despite an encouraging start to the season with a new personal best short program, I was unable maintain this form and my body has started to tell me it has had enough. It was a tough decision but given the circumstances I know it is the right choice,” said Reynolds.

Reynolds continued, “I would like to thank Skate Canada for their support throughout my long and wonderfully rewarding competitive career. I would also like to thank the many Canadian and Japanese skating fans who always supported and believed in me, even in those moments where I doubted myself. Finally, I would like to give a special thank you to my long-time coach, Joanne McLeod, who has been with me on this incredible journey every step of the way. I look forward to continuing my involvement with the sport of skating as I move on to the next phase of my life and pursue new career opportunities.”

Reynolds is an eight-time senior national team member and has represented Canada at the world championships six times. In 2013, he won his first senior gold medal on the international circuit at the ISU Four Continents Championships. During his successful junior years, he qualified for the 2006 ISU Grand Prix Final, wining the bronze medal.

“Kevin has been an important part of our national team program for the last decade. We would like to thank him for his dedication to the sport and for his innovative style of skating combined with his technical skill that inspired so many around the world,” said Debra Armstrong, CEO, Skate Canada. “Skate Canada wishes Kevin all the best as he begins a new chapter of his life.”

Reynolds is working towards completion of his degree at the University of British Columbia. He is expected to graduate in 2019 with a Bachelor of Arts in International Relations, with a minor in Japanese Language and Culture. He will be staying involved with skating as a full-time coach at the Champs International Skating Centre of B.C.